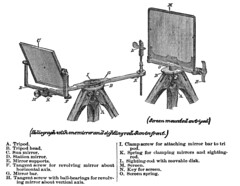 This set is devoted to images of the Heliographs developed and used by the United States Army Signal Corps.

The US Army Signal Corps initially tried the British Mance system of a round, tilting mirror on a single tripod, but soon settled on a dual-tripod system with one or two square 4.5 inch mirror mirrors on azimuth/elevation mounts on one tripod, and a shutter on the other tripod to modulate the sunbeam. The shutter underwent an evolution from a single vertical axis shutter, to a single horizontal axis shutter, through dual, quadruple, and six-blade horizontal shutters. Signal Corps heliographs saw action in the hunt for Geronimo, the Spanish-American War, and other actions in the early 1900s.

Signal Corps involvement with heliographs began at least as early as the Signal Corps heliograph exhibition at the International Exhibition of 1876. By 1879, the US Signal Manual devoted 14 pages to heliographs, Colonel N.A. Miles had established a 140 mile line of heliographs linking Fort Keogh and Fort Custer in Montana and Lieutenant F.C. Grugan, inventor of the American heliograph had an initial design for his heliograph. Grugan patented his heliograph in 1881, and had it perfected by 1882.

In 1882 as well, Marion Maus had established a four heliograph line connecting Forts Grant and Bowie in Arizona and proposed extending this to Price and a camp on the Gila, requiring one intermediate station in each case (four more heliographs, total), requesting six Grugan heliographs for that purpose.

In 1884, Miles established a 50 mile single-hop link from Mount Hood to the Vancouver Barracks using personnel that had operated the heliograph line between Forts Custer and Keogh in Montana in the summer of 1878.


In 1886, Miles, now a general, was put in charge of capturing Geronimo, and put his experience with heliographs from 1878 and 1884 to good use. He set up a network of 27 mountaintop heliograph stations in Arizona and New Mexico to provide overwatch of a territory 200 by 300 miles in extent, and effectively sealed Geronimo out of the United States.

In 1888, the Signal Corps surveyed available heliographs, and a board including Grugan and Maus arrived at a standard for the United States Army Signal Corps heliograph, of which 100 were ordered that year. This version had a single-flap shutter pivoting on a horizontal axis, rather than the vertical axis of the original Grugan model.

In May 1890, the Signal Corps conducted a massive heliograph practice in Arizona and New Mexico involving 162 personnel,
( including then-Lieutenant Pershing at Fort Stanton). There were 23 active stations with 37 heliographs, including ten 8"x8" "station" heliographs. More than 3700 messages totalling more than 92,000 words were sent. The extreme stations: Whipple Barracks, AZ and Fort Stanton, NM, were 500 miles apart by the shortest route. The maximum distance worked, previously 75 miles, increased to 125 miles.

In 1892, perhaps partly due to issues exposed in the May 1890 practice, the single flap shutter of 1888 was replaced by the model 1892 shutter (or "screen") developed by Captain C.E. Kilbourne - it used two blades on horizontal axes.

The US Signal Service manual of 1905 has perhaps the most thorough training on the use of this heliograph, and is available in many formats on the Internet Archive here: Manual of Visual Signalling 1905

In 1905, the US switched to a six-blade, 6"x6" shutter, as seen in the later images in this series, as described and illustrated here in the 1913 Keuffel & Esser Catalog,

Some modern photos of a six-blade US Signal Service heliograph shutter are at the Fort Huachuca Facebook Page You can view a video of two US Marines setting up this heliograph and signaling with it here: US Marines with Heliograph - 1915

A 1910 US SIgnal Corps manual with a chapter on the heliograph is available for free download in many ebook formats here: Manual No. 6 Visual Signaling

In the fall of 1922, the US Marines put up for surplus 950 heliographs and 936 acetylene signal lamps[1] . While this may not have marked the very end of US military use of heliographs, it definitely suggests that the end was near at that point.