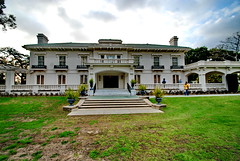 George Lawrence Stimson attended Throop Polytechnic Institute, Pasadena High School, and the Thatcher School in Ojai. As a young man he took an extended tour of Europe where he studied at the Lycee in Grenoble, France and the Real Schule in Leipzig, Germany. Upon his return, he joined his father in the family home-building enterprise. The successful architect was renowned for moving easily through all the popular architectural styles. He and his father are credited with conceiving the idea of electrically-controlled unit furnaces for home heating. His houses are known for their big halls on the second floor which were meant to provide temporary space for trunks because residents dividing their time between East and West coast were constantly packing and unpacking. He was a Mason, a Republican, a member of the Astronomical Society of the Pacific, the Valley Hunt Club, the Newport Harbor Yacht Club, and the California Club. G. Lawrence Stimson died in 1939 at the age of 57.