I am the "local photographer" of my own life. These are the "VANISHING MEMORIES." of BARNEYKIN.

She can shoot anything with a 'point and shoot' camera that anyone else can, and then some. (Now she mostly uses iPhone X.) 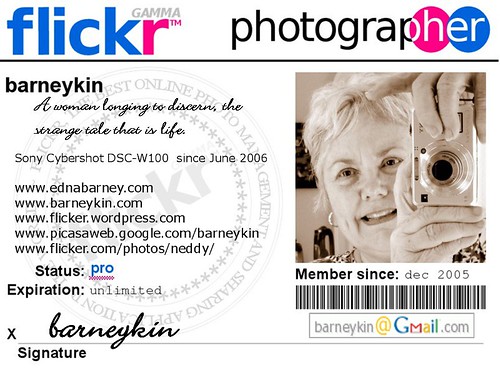 *As of September 2007, I have now uploaded 4,600 of my photographs to Flickr. They have been viewed almost 50,000 times. To date I have found twelve in Explore. I have also posted other photographs at Picasa Web Albums: My Picasa World.

I am very grateful for invitations to join various Flickr groups, however, I find Flickr so addictive that I try to limit myself. If I do not join your group, please do not take offense. I am honored also when you add me to your contact list, which tells me that you enjoy my pictures.

My Home: Neddy's Nook on the Net

Around the World and Back Without Ever Crossing the Equator!

Thank you for your donation to wiipedia.