Leading cubism into the 21st century.

As a painter I consider egg cartons as two-and-a-half dimensional objects which offer me remarkable possibilities for imagery. The waves of the egg cartons limit the viewer's perception; they also make him aware of his positioning towards the image. The intentional limitation in subjective perception gives room for imagination and recall: the process of occlusion. By a fusion of direct and indirect perception conventional imagery is overtaken. At first sight this leads to a physical and mental incompleteness, that forces an integration which can only take place within the inner experience, apart from time and space. (compare the ‘head of Janus’, that looks at the present and the future congruently.)

The shape of my new canvases - the eggbox structures- increases the amount of possible visual images in an almost exponential way. This forces the viewer towards an active perception, constantly changing the view-point and focus. Furthermore the true and represented space in these paintings interact during perception. One could say that the complete image just emerges sublimated in the viewers mind. Gestalt psychology states that human perception aims for completeness. Perceptions are being added subconsciously. My eggcubist works evoke conscious and dynamic adding.

The objects not only refer to themselves, they also refer to each other as a series. The grid could continue between them. Furthermore the actual space in which the viewer finds himself could be part of that space and could be seen alike. In spite of the relatively small actual size of the objects, they seem to exert a surprizingly large influence on the way that the space that surrounds them is experienced. The strange shapes and unexpected deformations recall flexible tentacles. They resharpen our visual tactility.

For a German, French, Portugese and Spanish translation: 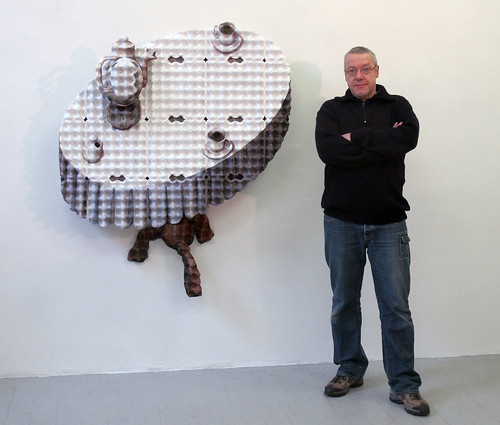 Enno de Kroon in his studio. 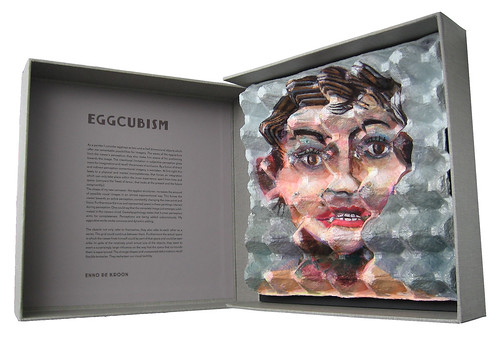 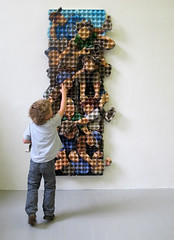 "Tell me, and I forget, teach me, and I may remember, involve me, and I will learn." - Benjamin Franklin.

Already in the mid 80’s Enno de Kroon aimed to break away from viewing conventions by painting and drawing on uncommon surfaces such as hot air balloons. Since then he has played with distortions of perspective confounding the viewer and making him conscious of his own way of observing. Egg cartons were around his studio for some years untill he found the courage to start working on them; the results are remarkable.

Starting to paint fictitious portraits on the bumpy surfaces of egg trays in 2004, Enno de Kroon encountered the interference of changing incidences of light with the rich colour of paint. Painting with hindrances requires a new approach by the painter which, as a consequence, also led the viewer to take a new approach to looking at the art. The viewer quickly discovers the presence of an obstacle when looking at the piece of work, which makes it necessary to observe it from different sides, and then to decide for himself which position he prefers best. Every position suffers the consequence that other parts of the work can’t be seen. The extra effort to be made offers something new to the art: The process of viewing these art works becomes a purposeful, interactive and exciting experience where both expectations and memories play a role. Enno soon called this new experience of painting and viewing art: Eggcubism. Early 20th century Cubist painters often depicted their subjects from a multitude of viewpoints to interpret and represent them for the viewer in a wider context. However, with Enno's paintings in contrast it remains that it isn’t the single or multiple interpretation of the artist which matter. The viewer plays, by simply accepting his work, an active role. The work is only valuable once it is in the spirit of the one who beholds it. By referring to Cubist characteristics, and leading them into the interactive 21st century, Enno co-operates with the viewer. His Eggcubism works integrate the viewer in the process of image making. All the while, the empty egg trays and their reuse make us re-think the existential and philosophical double problem of the chicken and the egg in a critical contemporary context; our thoughts on the origin and nature of life in an overpopulated and overproducing society are continuously questioned.

Several Eggcubism exhibitions made it clear that Enno’s works are easily acceptable and appeal to every individual observer, constantly taking in account subjective limitations and specific individual positions. Interestingly, it was through the open nature of the internet that the clear photos of these quirky works got noticed all over the world. In 2006 Enno launched his photos on the Flickr site and immediately they generated large numbers of viewers. The watching experience of the individual spectator before the flatscreen however is hampered by the lack of real live depth and occlusion. The intriguing photos of the Eggcubism works seem to point out these limitations.

Certainly part of the success was due to the upcoming worldwide vogue of Recycled Art, a widespread theme all over the internet. Enno’s work is regarded as a leading inspiration in a variety of articles on this subject. Questioned on this he comments with Dutch pragmatism “I didn’t discover Recycled Art, which –in my opinion- has come and gone for all ages. It is more likely that the new vogue of Recycled Art has discovered my work on reused egg trays, and there my art seemed to fit the spirit of the time, leaving the responsible observer the present-day freedom to choose on individual and critical positions towards the art. My work here finds its natural way to reach a large audience”.

Soon after this first online publication articles on Eggcubism were published in newspapers such as The Telegraph and in trendsetting art magazines from all over the globe. Then his work was also noticed by different art collectors and sales took off. In 2007 Enno sold a collection of 38 unique Eggcubism works to the German Peter Klaus Foundation. In 2011 an overview of his work on egg trays was exhibited at Rotterdam Central Library, where over 100,000 visitors got the chance to see his work ‘live’. and generated lots of discussion about the artworks. Increasingly getting noticed by the art scene, Enno’s unique works however remain scarce; his handmade artworks on recycled egg trays take him a lot of time and concentration to produce. In this way Enno de Kroon is a traditional artist;his work can be regarded in the ancient Dutch painterly tradition of painters like Breughel, painting recognizable subjects derived from common social scenes.

His recent work on egg trays extends to larger, multi-layered wall reliefs, showing group portraits that reflect the playfulness of Pop art imagery, but also have to be regarded in Dutch traditions such as Jan Schoonhoven’s light interfering white cardboard wall reliefs. Enno’s new wall reliefs involve the viewer in shifting frames of reference. The dynamics of the group are fore-grounded in this form of representation; groups and individuals are unified by the space instead of by an action and just as in reality the viewer is confronted with a range of social groups and individual intentions. The large Eggcubism paintings make the viewer a voyeur; they are immersed in the paintings surface and surrounded by groups of people but unable to interact on a social level, nor to grasp their exact intentions since they change viewpoint due to the multi-perspective perceptual presentation. The dynamic viewer is challenged continuously to define his relation to real and depicted objects. The egg tray structure here fulfils a transitional function, like a metaphor. From a poor quality material container, just sufficiently accurate for the safe transport of eggs, Enno’s reused egg trays have become a sustainable transmitter of durable pictorial ideas.

Nowadays Enno de Kroon's appealing art is often applied in educational contexts. The immersive viewer experience his works offer has developed an educational offspring. Eggcubism portrait teaching methods are studied all over the world, serving different grades of students from different cultures and social backgrounds. Egg trays are available all over the world as a recognizable part of everyday common household waste. Eggcubism courses have the aim to both explain and explore different visions on art education and artistic creativity. But they have also proven to be a purposeful means to playfully access more difficult subjects like the creation of, and reflection on, identity and identification. This educational offspring has added a new aspect to Enno’s artistry. He likes to be involved in the new extending social context of his art by giving advice to teachers and students, and facilitating workshops on his Eggcubism, thus taking part in the more general global debate on art & recycling.

As a result of the present interest for Recycled Art, Enno de Kroon has been invited to participate in different international group exhibitions. From 2013 he has been showing his works in Rome at the Riscarti Fest (2013, 2015), in Madrid at the ReciclaMadrid and in 2014 he took part in the International 'From Waste to Art' exhibition in Baku, Azerbaijan. Participation in these exhibitions offers a present-day context for his art as well as the opportunity to get in touch with different artists from all over the world. Still now he prefers to work on his own, in his studio in historic Delfshaven, a scenic old part of Rotterdam. Herein 2015 he opened a small showroom, located under his studio, where he is able to display recent works on a more permanent basis.

The 2016 solo exhibition Eggcubism - the two and a half dimensional art in Italy brings together the Fondazione Culturale Hermann Geiger's beautiful selection of 54 of Enno’s Eggcubism works from 13 different collections. Many of these artworks have never been in the same space before. It is an unique opportunity to see and experience a complete overview of the past 12 years of his artistic developement. Formore, the catalogue and the video document that the Fondazione Geiger are producing, will prove to be durable documents on Enno's art.

An artist biography is available at:

Copyrights on my pictures:

If you wish to use or publish my pictures in any way, please contact me first.

For exhibition requests please contact the artist by email: info@ennodekroon.nl

Have something nice to say about Enno de Kroon? Write a testimonial