Enjoying my 3rd career now, as a Web developer. I work on Coronado Island, which is one of the prettiest parts of America's Finest City -- San Diego, California. It actually makes the one hour (1 way) commute from our home in Oceanside worth the effort.

My main focus, outside of work, is the K-9 Search and Rescue group that my wife and I founded, Southwest Search Dogs. This is an all-volunteer group that uses dogs to look for missing people and human remains. My wife has a Bloodhound (Emmy) and I have a Vizsla (Roso) as partners, but we have a wide variety of breeds in our unit. Here's a short video explaining what we do, another one of my previous dog Cielo and me during a practice session, and a music video of Cielo that I captured as he was "relaxing" after a training session. All three require Windows Media Player for viewing. 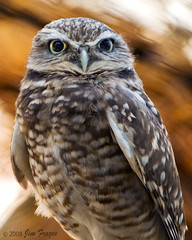 This species holds a special significance for me, since the Spanish word for it is Tecolote, which was my dad's trademark. Besides being a world-renowned gladiolus hybridizer and at one time one of the largest commercial gladiolus cut-flower growers in the country, he perfected the Tecolote brand of ranunculus and also grew freesias, anemones, watsonias, oxalis, paper whites, and many other species that I don't remember.

The strains that he started are still being commercially grown today at The Flower Fields in Carlsbad, California. I'm so proud of all that my dad accomplished and wish like heck that he was still around to see this photo, because I know he'd really like it.

My interest in photography goes back a long way, to when I was an intern with a professional portrait photographer and I was the photographer for our high school's yearbook. The camera I used then was a 4X5 Graphlex (an example of which can be seen at famous Flickr photographer Mike Jones' contact page) that would only hold two sheets of film at a time. After graduating from high school, I took a 30-day trip across the country, in an un-air conditioned school bus, during the month of July, with a church group, during which I borrowed my dad's Argus C-3. During my time in the Army (after being drafted, during the Vietnam war), I was able to get a good price on a Minolta Maxxum 7000 and it was my first "good" camera, but I hardly ever used it.

My first digital camera was a Canon G-3, but when I found out that DSLR's were available for under $1,000, I bought a Canon Digital Rebel. I now shoot with a Canon 1D Mark IV, a Canon 5D Mark III, a Panasonic Lumix FZ200, a Sony DSC-QX100 Smartphone Attachable Lens-style Camera, and an iPhone 5s. During the years with my original DSLR, I captured relatively few images and it is only since joining Flickr, on 9/1/07, that I have developed a passion for photography and spend most of my free time on it, including the time I spend on Flickr.

Jim's love of animals and birds is strongly evident through his wonderful photos. His amusing comments make me smile each day and I'm always learning something new and interesting from his stream. I'm also learning Latin! Jim has a great sense of humo(u)r too... I think! Oh, and he's an excellent photo editor! … Read more

Jim's love of animals and birds is strongly evident through his wonderful photos. His amusing comments make me smile each day and I'm always learning something new and interesting from his stream. I'm also learning Latin! Jim has a great sense of humo(u)r too... I think! Oh, and he's an excellent photo editor! Thanks for making Flickr so much fun, Jim!

If you happen to stop by Jim's photostream then you are sure to see what a down to Earth, compassionate person he is. His love for animals and nature is seen throughout his whole series of images. He can also be funny.. but only sometimes :-) It's an honor to be your friend. Didi