admin
Nguyen Ngoc Chinh 2:43am, 7 October 2007
Before 1975, the year Saigon collapsed, three-wheel Lambrettas and Lambro were a common sign on the streets. This is a means of public transportation up to 10 passengers sitting on 2 benches along the three wheeler. In the driver's compartment, sometines 2 passengers can occupied the seats by his sides.
The Lambretta was a line of motor scooters manufactured in Milan, Italy, by Innocenti. The name Lambretta comes from the name of a small river (Lambro) in Milan, near the factory. In 1922, Ferdinando Innocenti of Pescia built a steel tubing factory in Rome. In 1931, he took the business to Milan where he built a larger factory producing seamless steel tubing and employing about 6,000. During the Second World War the factory was heavily bombed and destroyed. It is said that surveying the ruins, Innocenti saw the future of cheap, private transport and decided to produce a motor scooter – competing on cost and weather protection against the ubiquitous motorcycle. Innocenti company started production of Lambretta scooters in 1947 and ceased production in 1971. However, Lambrettas were manufactured under licence in Argentina, Brazil, Chile, India and Spain, sometimes under other names but always to a recognizable design (e.g. Siambretta in South America and Serveta in Spain).
That's the story of two-wheel Lambretta, the three wheeler later developed for the purpose of public transportation. Today in Saigon we can only find 3-wheel Lambrettas in the suburbs and countryside where they are used to transport miscellaneous things, sometimes even as trash collectors! You can hardly find a Lambretta in the northern part of Vietnam. 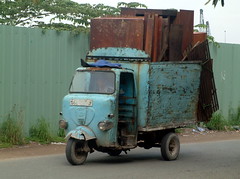 We can also find other versions of Lambretta in Thailand as Tuk-Tuk or India... Shooting this rare Lambretta becomes a challenging task but, I think, it's worth a try. Here are some more interesting photos: 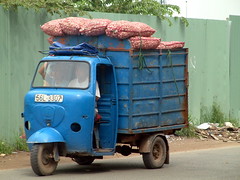 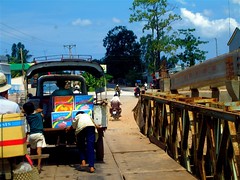 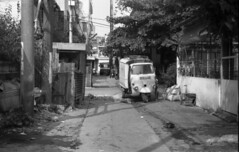 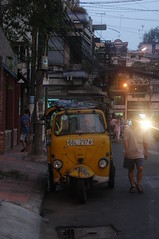 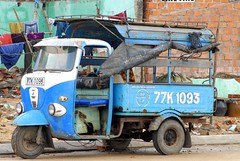 Lucas Jans 13 years ago
Interesting post Chinh. It was just last Friday I was eating dinner with my friend's family when my friend's father told me about the Lambretta's in Saigon before 75. He said they were the best, more revered than a Vespa. I told him I didn't think I had seen any 2 wheelers. Now I know why. I'm curious what a two-wheeler looks like.
admin
Nguyen Ngoc Chinh Posted 13 years ago. Edited by Nguyen Ngoc Chinh (admin) 13 years ago
I've just found a photo of the two-wheeler Lambretta taken long time ago in Saigon by Tom Langley. The body of Lambretta is a bit longer than the Vespa's. Now, you can imagine what this kind of scooter looks like. 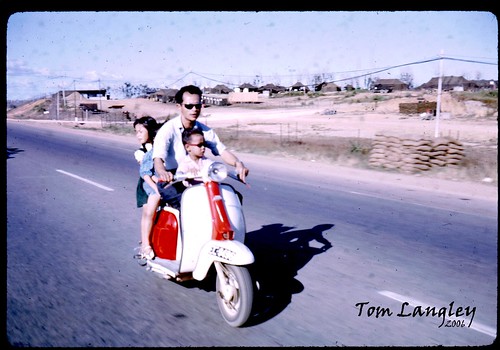 gray butter [deleted] 13 years ago
what is an informative post about a historical vehicle. thank you uncle Chinh
Panoramarcos 13 years ago
With all your information You remind me about Lambrettas in my country Chile. Together with Vespa were the popular scooters in the streets of our cities in the fifties and beginning of sixties.
Actually, when I arrived in Saigon the first time in 2004 I was very happy to see Lambrettas again, after so many years. One the many reasons because Saigon is "My" city now.
Thanks friend for your excellent information.!
Lucas Jans 13 years ago
Beautiful 2 wheel Lambretta! I can see why they were loved.
DufferLong 13 years ago
Thanks for the very informative write-ups on Lambretta and the rare pictures of them.
admin
Nguyen Ngoc Chinh 13 years ago
I'm glad some of you are interested in Lambretta topic. You are welcome to post here topics of your interest and I believe many people will join the discussion.