admin
darcydancer 12:20pm, 19 April 2016
Kristin Van den Eede, a street photographer from Ghent, Belgium has an eye for the extraordinary and striking contrasts. She is listed by streethunters.net as one of 25 Inspirational Ladies of Street Photography. Kristin is also one of the admins of the APF Flickr group
We're pleased she has agreed to provide an instruction "for Street & Repeaters."

Hi Kristin, it’s a great pleasure to interview you for S&R. I first noticed your work in Street Fight about a year ago and have been a fan ever since. Your image of the zombie girl grabbed me as I also like to photograph oddities at night. Is there a story behind the shot? 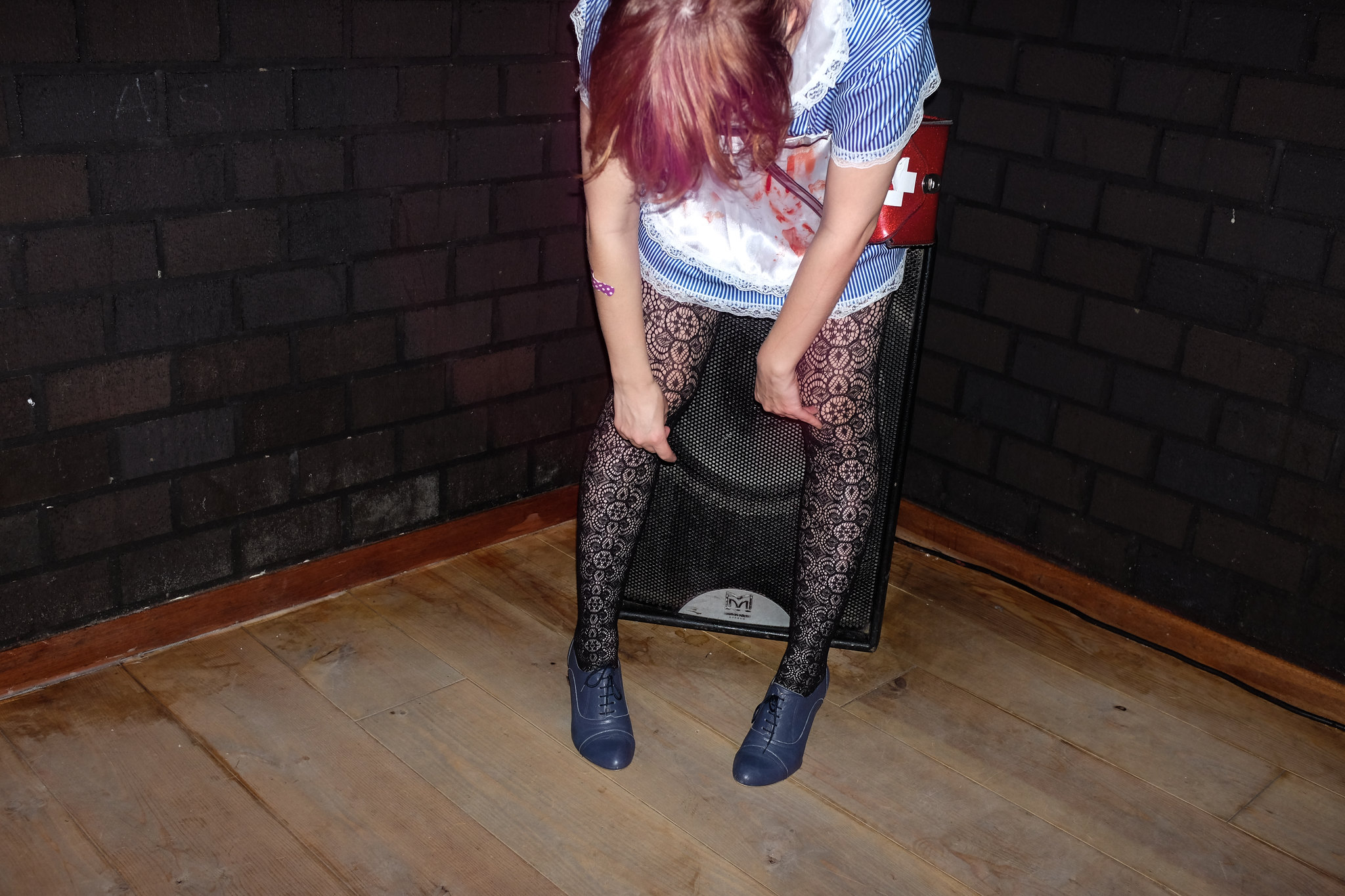 Well, basically, I was having a good time at a dress up party and just got lucky. I usually take my camera with me to parties because having fun is kind of synonymous with shooting pictures for me. Plus, it’s just a great occasion for shooting. All the little dramas, people’s elated expressions, the intensity of it …
I don’t recall the exact moment when I took this because it was already quite late, but the strangeness of the moment just struck me. She was standing there like a lifeless doll in the corner, blood on her nurse’s outfit, sexy stockings out. She looked like the saddest girl at the party.

Your partner in crime (and life) is Kristof Vande Velde who also shoots street. I understand ( please correct me if I am wrong) that you were his ‘eye’ - pointing out interesting moments although you were not yet a street photographer.
What made you start street photography yourself? Was there a moment or a scene that made you think, "actually, I can do that" ?
Yes, a couple of years ago, Kristof became very interested in photography, but he was not a street photographer back then yet. He was interested in lots of different genres, but not yet street photography. I became the frustrated partner who tagged along and pointed out interesting things to him (although I doubt that they were actually interesting at all!). After a while, we both discovered that there was such a thing as street photography, mainly thanks to Flickr. We quickly became inspired by what we found online and in photography books and have been sold since. It just grew organically, without putting much thought to it, really.

Fact is, I’m still not sure what I’m doing most of the time and I don’t really have a fixed plan. I’m just following my gut. And I simply love shooting on the street, so that’s what I do. I can’t look at the street the way I used to anymore, I can’t not do street photography.

I enjoyed reading about your Sweden trip and the hunt for blonde people, What was the thing with blonde hunt, can you elaborate on this?
Thanks!The blonde hunt was actually one of Kristof’'s ideas. He wanted to see whether all the stereotypes about Sweden and its inhabitants are true. Do they really all drive a Volvo? Are they really all that blonde? So we set ourselves the goal of getting at least five blondes into a good layered street shot. I don’t have to tell you that that’s hard. Really hard. We got some shots but none of them were any good. We did have a lot of fun with it though :) It sounds like a fun trip It was a great trip.

It was wonderful to show one of my favourite cities to Kristof. ☺ As you may know, I teach Swedish for beginners in Belgium, so I was very excited to show Kristof what all the fuss is about for me.

There were many places where I enjoyed shooting in Stockholm, but I think the Vasamuseet was one of the highlights. You know, some days, you are on a roll. You just see all these amazing moments and just need to capture them. It’s like it’s all being laid out especially for you. That’s what it felt like at Vasa. It only happens a couple of times a year – if I’m lucky – but we spent hours there, both shooting like crazy. This is one of the shots I took that day:

You enjoy weekends away visiting different places and I read that you take 600 shots on average in any one day. Do you wait for specific shots to happen in a chosen location or just keep walking and shooting. I am interested in a typical shooting day
I don’t really take that many shots anymore, unless in extraordinary circumstances. I have become much pickier than I used to be and may end up with anything between 20 and 200 pictures at the end of a shooting day. I’ve just come back from Tokyo and I think I got an average of around 200 shots a day, give or take. Then again, some days I didn’t shoot anything at all, because I was too jetlagged and just didn’t feel like it. I need to be able to take a break every now and then. Stop for a moment, so that I start to miss it and then start again with renewed energy.
A typical shooting day for me would be a combination of some kind of cultural activity (a museum, an exhibition, …), some drinks and good food and just a lot of shooting during all of these things. Perhaps looking at a great photography book for inspiration on the train there. And reading a good book or listening to music on the way back.
I have a bad habit of overthinking things and worrying about not getting any good shots or not getting the most out of a particular opportunity, so I know that I just need to stop think about this and relax. Go with the flow, follow my instincts, let go. Just do something that I like and capture any scenes that appeal to me on the way. That is why I prefer to go out and shoot alone or with Kristof and why I can’t really shoot that well with others. Having him there relaxes me, knowing that I can run off mid-sentence because I’ve spotted something and he’ll be doing the same. We always seem to find each other in a crowd and are able to shoot together, yet not in the same place. If he got something good, that makes me want to “hunt” more too. I’m quite competitive that way ☺

That’s a great insight into how you work with Kristof and so different to the way my brother and I shoot together. Typically we will yell ‘MINE’ at each other or even worse I will walk in front of his scene.
Haha, I don’t have any siblings but that sounds like what a brother and sister would do! No we’re pretty relaxed about it. Or should I say, Kristof is relaxed about it. I am more uptight and have shouted my fair share of “go! go! get out!” at him when he walked into my frame. Poor guy ☺
Makes me wonder if Danni & Karl have an agreement ie. left hand or right hand street or whether the Bragdon Brothers have an all out fight :)

Your flickr stream is so interesting and this one made me just stop and a bit of a WTF moment, please do tell us about it.

Cool! I’m glad you picked this shot because I like how it came to be. I was shooting together with Kristof, Abhishek Kiran Dani and Roberto Deri at a carnival (Aalst carnival, infamous in Belgium). I was frustrated because I hadn’t gotten anything good and everything was so in-your-face while I was looking for something subtler and darker. We had just said our goodbyes and were walking home with a friend when I saw this scene:

I was so excited about it that I became totally stoked. I walked on and came by this living room and I was too tired to have any sense of shame, so I just pointed my camera in their living room. One second later, they all started smiling and the moment was gone.

Your recent trip to Tokyo did it reap some good rewards for you?
I think so, but it is too soon to tell. I like to sit on my images for a while, to make sure that I still like them a couple of months after I’ve posted them. So I’m still going through all my shots and will post some stuff soon. Shooting in Japan was a fantastic experience, but you do need some time to separate your own wonderful memories from your shots and to see your work for what it really is.
Fair enough from one who goes back several years before posting :) In that case, what about a few of your faves?

These are two of my recent favorites (I change my opinion all the time, though):

I took this one a while ago, in the Metropolitan Museum in New York. This woman walked by and just struck me. She had this certain “je ne sais quoi” – as Americans might put it ;-) – dressed in this long white gown that contrasted beautifully with her dark skin. She took a seat in front of me, as if to say “take my picture”. She remained seated for a while, checking her camera every now and then and glancing around in the most elegant way you can imagine. I took several shots and at some point straightened my back (I had been bending over). She looked straight at me and I just nodded. She nodded back, got up and walked away. One of the most enigmatic encounters I have had.

This is another one of my favourites, because it was taken in a place with lots of good memories. I was on holiday with my best friend in Budapest and we went out for a drink in one of the ruin bars. The light there was amazing, so I took several shots that night, and this was one of them.

Finally Kristin, I envy your eye for telling a story, for filling each photograph with that bit of extra, the bit that many of us street photographers aspire to have and you are lucky to have found this so early on.
Thank you very much for the interview.
That is so nice of you to say, Kathy! You are too kind ☺ I am honoured to do this interview and give this instruction for Street & Repeat, and I can’t wait to see what people are going to make of it!
watcher330 5 years ago
That's a good way to live and enjoy it to the full.
Kristin Van den Eede 5 years ago

poddy1021: Thanks, guys. I'm really happy that you found it an interesting read :-)

chrisowenrichards: It IS a lot of fun, Chris! :-D Really, enjoy yourself! Enjoy the rush!
Shang the Gardener 5 years ago
Nice interview, thank you Kristin and Kathy! :) I especially like the point "you need some time to separate your own wonderful memories from your shots".
Leripix 5 years ago
Really enjoyable interview Kristin and Kathy - thank you. I like the number of times you say "enjoy" and "relax" :)))
cjcrosland 5 years ago
Great stuff, thank you Kathy and Kristin!
Kristin Van den Eede 5 years ago

Shang the Gardener and

Leripix: :-D I didn't even realize that myself! My own mantra ;-)
sameerwalzade 5 years ago
Great interview. Thanks a lot Kathy and Kristin.

I loved this line Kristin - 'you do need some time to separate your own wonderful memories from your shots and to see your work for what it really is'.
michaelkowalczyk.eu 5 years ago
Funny to imagine you "run off mid-sentence" when shooting with your partner. Thank you for sharing your inspiration and #04!