admin
Darrell Godliman 10:33pm, 9 October 2019
*** This is a beta feature for Flickr Events. Please join the Oxford flickr group and reply to the discussion thread so we can keep you updated. ***

Having discussed with members at our last pub meet I thought we should organise a weekend photowalk given evenings are no longer an option once the clocks change.

On that basis I'm proposing an Architectural Photowalk on the afternoon of Sunday 10th November. This is Remembrance Sunday but hopefully given the 2pm start this shouldn't interfere with anyone's plans in this regard.

The plan is to meet in the courtyard of the Ashmolean Museum on Beaumont Street and then spend two hours exploring Oxford's amazing buildings ranging from the very well known to tucked away comtemporary gems that you might not have previously stumbled across.

I've yet to finalise the route but I'm thinking we'll head down St.Giles to the University Science area, through the Radcliffe Observatory Quarter into Jericho, ending up at a pub (yet to be decided) for 4pm.

This is a joint event with the Oxford Photo Walk group ( oxfordphotowalk.wordpress.com/ ) so it looks like we will get a decent sized group together. It should be an opportunity to get some photos whilst meeting some fellow Oxford photographers in a friendly, informal setting.
Hope to see you there.

ashrafuyahya76: Hi, we look forward to meeting you on the day. As you might have seen there's also regular meetups at lunch time on the first Friday of the month, more details here : www.flickr.com/groups/oxford-uk/discuss/72157711537396442/
admin
Darrell Godliman 2 years ago
Can I ask those interested in joining the walk to register for a free ticket at Eventbrite : www.eventbrite.co.uk/e/architectural-photowalk-hosted-by-...

Whilst not essential to register it will help us get an idea of numbers and you will also be notified if there are any last minute changes.

As per normal Oxford Photowalk Group events there'll be an optional competition. Entries will be posted anonymously on their Facebook page and people vote for their favourites. You can find their Facebook page here : www.facebook.com/groups/oxfordphotowalk/
JAT-2018 2 years ago

Thanks, Darrell. I take it that to participate in the competition one needs to be a member of Facebook ?
admin
Darrell Godliman 2 years ago
It helps but if not then photos can be published on your behalf. I'm guessing you could even then take a look at the posted images (I think it's a 'public' group.....) and then your votes could be included in the final tally. Images are posted anonymously and you can't vote for your own images....... I'll get this clarified with the Oxford Photowalk Group organisers.
JAT-2018 2 years ago

Thanks, Darrell, but no. As we all know, Facebook is not an ethical company, which is why I will have nothing to do with it. I believe the same stance has been adopted by other members of the Oxford Flickr Group.
admin
FlickrDelusions 2 years ago
I don't 'do' FB either, I'm afraid. Could we not use a new Flickr group to showcase photos from the walk?
admin
Darrell Godliman Posted 2 years ago. Edited by Darrell Godliman (admin) 2 years ago

JAT-2018: I understand your viewpoint but I think Facebook is the only convenient way to run the competition. Images can be uploaded to FB in quite low resolution if that would partly allay your concerns.

To use flickr would mean everyone would need to join flickr to vote on the entries and I'm guessing Flickr members will be in the minority of attendees. I'm sure there'll be quite a few of us on the day but as it stands only a handful of flickr members have expressed any interest whereas the FB event page has 30 people that have either said they're coming or 'interested'.

I'm going to be encouraging everyone to join flickr and hopefully we'll end up seeing a lot of the photos in the Oxford Flickr group (and the Oxford Contemporary Architecture group), albeit one of the conditions of entering the competition is that the images shouldn't have been posted to social media until the results have been announced.

The competition is meant to be a bit of fun and there's no prize as such other than some exposure to the winner via the various social media accounts etc. In that regard people don't need to participate in the competition as the main goal of the event is to get a group of photographers together and go out and take some photos.

You can find out more about the way the Oxford Photowalk competitions are normally run here : oxfordphotowalk.wordpress.com/faqs/
JAT-2018 2 years ago

Hawknose Harlequin: Thanks. I'm keeping an eye on the weather...... Currently overcast but changeable as yesterday it looked like we might actually get some sunshine.
admin
Darrell Godliman 2 years ago
Thanks to everyone that came along today. No doubt the weather helped but there was nearly 40 of us........ For those interested, I've given the route below with some of the key buildings we photographed in case you want to tag them etc.

Details of the competition will be posted on the Oxford Flickr and Oxford Photowalk Facebook groups shortly. People can submit two photos and given the judging is anonymous you're not meant to post your entries to your own social media accounts until after the results have been announced in about a fortnight.

After that I hope to see lots of photos in the Oxfords Contemporary Architecture group : www.flickr.com/groups/oxfordcontemporary/

Many thanks, Darrell, for organising an interesting tour and now for the details of the buildings and their architects. Much appreciated.
admin
FlickrDelusions 2 years ago
I second that: thanks again, Darrell
admin
Darrell Godliman Posted 2 years ago. Edited by Darrell Godliman (admin) 2 years ago

FlickrDelusions: Thanks. We'll have to do it again some time. 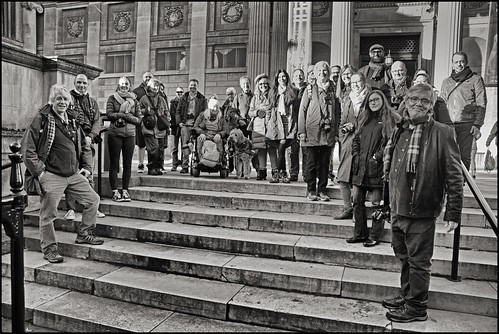 admin
Darrell Godliman 2 years ago
For attendees thinking of entering the Photowalk 'Architecture' competition you can find details here : oxfordphotowalk.wordpress.com/photo-contest-rules/

The deadline for submissions is midnight Saturday 16th November.
Gerry Lynch/林奇格里 2 years ago
I was away in Scotland this weekend but would love to join you at some future point... at least before I leave Oxford for good next June!
admin
Darrell Godliman 2 years ago

Gerry Lynch/林奇格里: Regular monthly Third Thursday Photowalks will resume in the Spring but over the Winter we still have social pub meetups. This months will be next Thursday, I'm going to be announcing details shortly.

There may be some 'First Friday' afternoon photowalks in the meantime and potentially some one off events.

Hope to see you some time soon.
Gerry Lynch/林奇格里 2 years ago
Great stuff,

If you've a spare couple of minutes then by all means take a look and vote for your favourites by either 'liking' or 'loving' them here : www.facebook.com/media/set/?set=oa.1006176129722710
admin
Darrell Godliman Posted 2 years ago. Edited by Darrell Godliman (admin) 2 years ago
The results of the recent Oxford Flickr / Photowalk group 'Architecture' photo competition have been announced.

Congratulations to the winners but thanks to everyone that came along and took part.