Postcards were created to be boring. Postcards are meant to communicate the impossible message: "It's great fun here! Please envy us!"

This group is an atttempt to collect boring postcards. 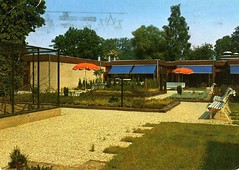 What?
Postcards, NOT PICTURES THAT LOOK LIKE POSTCARDS. So the real thing: preferrably old.


How?
Either scan or take a good shot of the postcard. Please describe the content of the scene by what you found on the back of the postcard. Most of the time location, names, year etc. are described. Minimum info should be location name and country.
Additionally you can add links for usage in the Google Earth >> earth.google.com application to exectly pinpoint the location. See the first posts in this group (by me) for examples. ALternatively map24 or Michelin directions can be used as well.
Please tag the postcard pic with "boring postcard" and "boring postcards"

Yadayada?
No self made boring postcards allowed - a boring picture doesn't qualify. There's other groups for those, who'd like to post the ultimate boring img.

NOTE: Please respect copyrights: Do not post postcards from boredom which are still in stock and are being sold. I collect postcards which presumably aren't sold anymore. I wouldn't want to ruin anyone's boring postcard business. I hope you respect that too.

Postkartenfranz - a contributor - has a nice postcard Blog (in German) with beautiful cards I recommend posting here ;-)