- Pau Buscató can you introduce yourself to viewers out there?

I was born in Barcelona in 1975 and live in Norway since 2009. I also spent 9 years in Ibiza from age 8 to 17, and after that studied
architecture in Barcelona and a year in Oslo as an exchange student. Over the years I specialised in 3d visualisations of architecture
projects, something very related to photography.
Street Photography has been (or is being) the solution to an unscratchable inner itch that's been present all my life.

- How did you hear about street photography and what you want in the streets?

I'm not sure how I first heard about Street Photography, but I guess it was through some of the greats like Henri Cartier Bresson, Robert
Doisneau or Elliott Erwitt. I never had any formal photography education, so it all has been a quite slow and organic process for me.
The seed must have always been there (the cause of that itch), waiting for me to realise and start watering it. Once I did and the plant began
to grow it has simply become an obsession. A need.
In the streets I like to be very open and let my intuition and imagination guide me. I basically try to establish connections between things,
find invisible bridges to connect the dots. It is as unpredictable as when my grandfather Demetri took me fishing in Cadaqués. You never
know what you're gonna get, if anything at all.
"Street Photography" is one of those terms where the whole is greater than the sum of its parts. Anyone unfamiliar with it would quickly think
it's just about photos taken in the street, but these two words put together have transcended their literal meaning and reached higher altitude.
Street Photography is a way of Seeing.

- How do you think your photography reflects your personality?

Same way a poet constructs their poetic universe with metaphors and other literary devices, the best street photographers are
also building up their personal universe (with its own rules and dynamics) and showing it to us through their photos.
Personally, I'm still in my early stage and without a huge body of work, but hopefully each one of my photos will be like a stroke
of a pencil in what in the long term will become a faithful (and ugly) portrait of myself. Each one of us has a unique way of seeing,
and although we can be influenced by others and follow tendencies and cliches, in the end your best work will always be the one
that's more faithful to that original way of seeing.

- What inspires your creative vision?

Anything that stimulates my imagination and creativity inspires me, be it in form of a movie, a book or an art exhibition.

- Who are the street photographers (classic and contemporary) who inspire you?

I've always enjoyed the works of Kertész, Koudelka, Winogrand or Elliott Erwitt to name just a few. Peter Dench, Martin Parr, Jesse Marlow or
Siegfred Hansen, and many talented street photographers here in flickr. Thanks all for being a great source of inspiration.

Of other photos of Pau LL. Buscató: 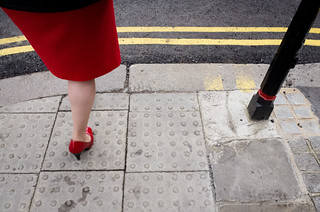 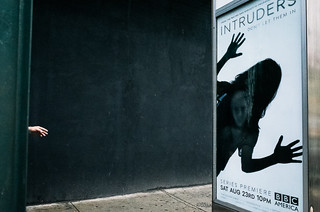 A big thanks to Pau LL. Buscató
Jeff Larson (Raw Power) 7 years ago
David, I am really enjoying your interviews, thanks for this service.

Cheers, Jeff!
admin
DavidSanchini Posted 7 years ago. Edited by DavidSanchini (admin) 7 years ago
Thanks to all,
I make it for sharing with the community of " street photography "
Fabio Petry 7 years ago

I wonder how you create your work...
I suppose you are a very patient person.
Your work is very inspiring!
I'm a big fan!!
Congrats from Brazil!!
Pau Buscató 7 years ago

Hi Fabio! Thanks mate, yes I guess I am quite patient. Not always, though.. ;-)
Davide Albani 7 years ago
Great interview and incredible and very inspiring images...big fan of your work Pau!
Sincere congratulations!