Where to find Holiday's work?

admin
Aidan McRae Thomson 9:00am, 17 May 2009
I thought this might be a good place for people to note locations and favourite pieces by Holiday; Currently I don't have a full gazeteer of where all his works are to be found, so to start off I'll just add I few I'm familiar with that others may be interested in:-

Alrewas, Staffordshire - Ascension (3 lights, east window) Painted detail has suffered badly, as has one of a pair of lancets nearby. (chancel north)

I'll add more details in due course.
David Cronin 12 years ago
Can I add two churches in Somerset.

St James, Buttermere, East Window, 1 window - 2 lights
Hexham Abbey, 1 window - 1 light
Ponsoby (undedicated), West Window, 1 window - 2 lights
St Michael, Muncaster, South Chancel/Nave, 3 windows - 6 lights
All Saints, Hawstead (on behalf of J.Powell), 3 windows - 9 lights
St Helen, Wheathampsted, West Window, 1 window (if you can get to this one you're better than me !!! It's behind the organ in the west gallery !)
Glass.Mouse 11 years ago
St Nicholas, Compton, Surrey - South Isle (St John the Evangelist; St Paul)
Bonnetmaker 11 years ago
Illustrations to "The Hunting of the Snark".
 Wood blocks: University of Toronto Libraries
 Prints: Bryn Mawr College Library
MAH2012 11 years ago
I am a Henry Holiday descendant. I knew of his existence which was spoken of within the family but didn't realise he was known at all today. I live in Oxfordshire and would love to see some of his work, does anybody here know of other HH works in the area? I will rty to visit Worcester College Oxford in the next few days.
MAH.
Bonnetmaker Posted 11 years ago. Edited by Bonnetmaker (member) 11 years ago
A cartoon (lampooning Berlusconi) based on Holiday's work you can find in the 2011 February 17th edition of a well known daily paper published in Berlin (Germany). 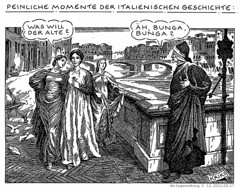 - St Mary the Virgin, Forthampton, Gloucestershire
The stained glass was by William Burges, Frederick Preedy and Henry Holiday. Holiday's window dates to 1865 and is a Pre-Raphaelite style window by the pulpit.

If memory serves (my notes are in storage currently), but I think some of the stained glass at Stokesay nr Ludlow was by HH:
- St John the Baptist, Stokesay, Shropshire
www.flickr.com/photos/serosedserio/sets/72157628185934029/
The church is next to the English Heritage property Stokesay Castle. There was an Arts & Crafts influence in the church with enamels by Arthur Gaskin, in addition to traditional style wall paintings of scripture text. 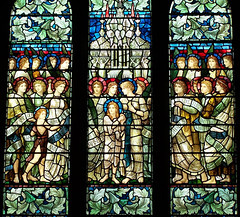 Brief details of the venue and church opening dates given in the other discussion thread. Please confirm details on the Heritage Open Days 2012 website and the venue if travelling to visit.
dajavous Posted 9 years ago. Edited by dajavous (member) 9 years ago
Aidan, can you send an invite to the photo above if you agree with my identification of it as the' fine Holiday'- thanks, Jackie.

I was looking for the Lewes windows at All Saints’ Centre, Friars Walk, Lewes, East Sussex, BN7 2LE.
I couldn’t find All Saints Centre on flickr. I thought this was a possible Holiday at St Michaels, but the database says the definitive St Michael’s Holidays are: 1885 Dorcas/Eunice; 1881 Roundel St Swithin; 1881 Angel.

Here is the Dorcas/Eunice - which you could invite:

Examples of all the above posted to the group in recent weeks.

I spotted a Faith, Hope and Charity at Collingham All Saints last Sunday which I'm pretty certain is Henry Holliday's work - I will post it below for confirmation. The church has only an introductory DAC website entry and the sheet from the church completely ignores the stained glass. 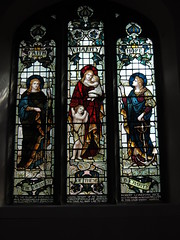 I don't use Flickr too often anymore. Since last year I maintain snrk.de, a blog about Henry Holiday's illustrations.

There also is a first printed article: nose.snrk.de
admin
Aidan McRae Thomson Posted 3 years ago. Edited by Aidan McRae Thomson (admin) 3 years ago
I forgot to mention, in addition to the three early windows mentioned above in the south aisle at St Editha's, Tamworth there are also two later windows in the north aisle opposite, both in Holiday's more developed, flamboyant style and including one from the same cartoon used for the window at Chelmsford Cathedral:- 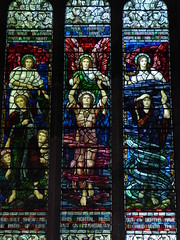 The original at Chelmsford below:- 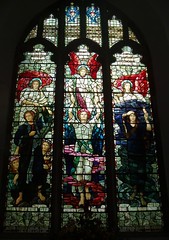 snrk.de/category/persons/henry-holiday is about Henry Holiday. There Hawes Water (watercolor, between 1859 and 1865) is among the landscape paintings which I like most. It's in the Victoria and Albert Museum.
Simon Knott Posted 3 years ago. Edited by Simon Knott (member) 3 years ago
Eye and Yelling, both in Cambridgeshire.

Pulham Market and Banham, both in Norfolk.

Eye has the Evangelists, and the Presentation in the Temple: 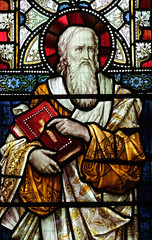 Yelling has a selection of saints in the east window, apparently reset here from elsewhere:

Banham has seven lights over three windows, depicting the evangelists and nativity/baptism/ascension of Christ:

Pulham Market has the east windows in the chancel and the south aisle, as well as the west window of the south aisle, depicting scenes in the life of Mary Magdalene, the Adoration of the Magi, and a couple of angels:

Sheepdog Rex 2 years ago
I have posted the St Stephen's church, Robin Hood's Bay, windows (listed above), as Fylingdales, the name of the actual parish. It is under the former in Pevsner but under the latter in the church leaflet and on various websites
Bolckow Posted 2 years ago. Edited by Bolckow (member) 2 years ago
I have just added the former High Pavement Church (now Pitcher and Piano Pub) Nottingham Sunday School Centenary window of 1905

Jacob and the Mess of Pottage
Designed by Dante Gabriel Rossetti and made by Morris, Marshall, Faulkner & Co. about 1863.